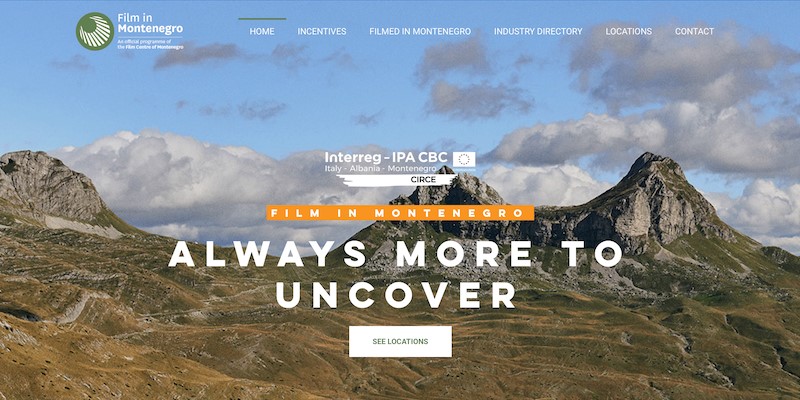 CIRCE, a new web platform for the promotion of Montenegro as a film destination
Overview

Film Centre of Montenegro presents a web platform called Film in Montenegro, implemented within the European project CIRCE - "Joint Initiatives for the Promotion of Cinematography between Italy, Albania and Montenegro", funded by Interreg IPA CBC Italy-Albania-Montenegro Programme 2014/2020. The web platform was developed during the previous year, as part of the CIRCE project, following the best practices of the project partners, but also new trends in this growing field of film promotion.

Film in Montenegro is the official programme of the Film Centre of Montenegro aimed at encouraging foreign film and TV productions to discover Montenegro as a new film destination.

With the so-called “cash rebate” system of 25%, but also other benefits and potentials that Montenegro offers as a film destination, the Film Centre of Montenegro is proud to present the Film in Montenegro programme, which was successfully adapted to the conditions of the pandemic that has significantly hampered international promotion of Montenegrin cinema.

The CIRCE project, within which the Film in Montenegro programme was implemented, is funded under Priority Axis no. 2 (smart management of natural and cultural heritage for the exploitation of cross-border sustainable tourism and attractiveness of the territory), Specific Objective 2.2 (improving cooperation of key actors in the field of providing innovative cultural and creative products) of Interreg IPA CBC Italy-Albania-Montenegro Programme 2014/2020. The focus is on improving the conditions for the cultural and creative industry of the audio-visual sector, in order to provide additional value of cultural heritage through cross-border initiatives and to establish a link between participants and key actors of new creative productions. In addition to the Film Centre of Montenegro, the other partners involved in the project were the Apulia Film Commission Foundation, the Albanian National Cinematography Center and Molise Region.